Hello!
Todays card was a labour of love. 💝 I made it for a birthday party my youngest son was invited to. It took an insane amount of time to come together and at one point I was ready to give up, but since I am so stubborn my ego would not allow this card to defeat me so I persisted.  😜 And I am glad I did because I actually like the final product. 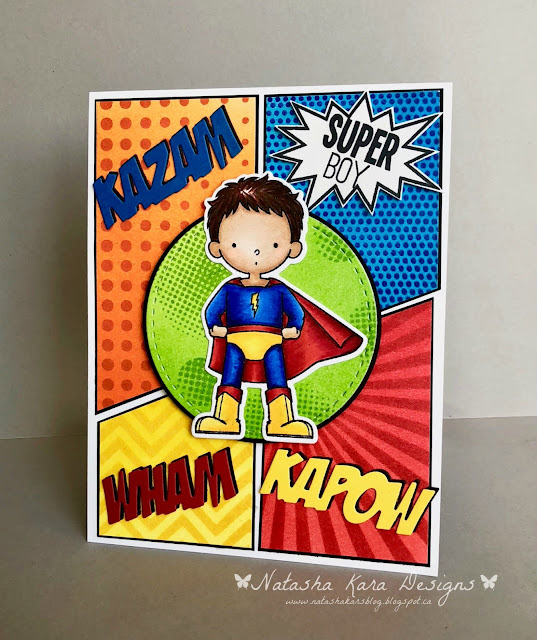 For a while now I have wanted to create a comic book inspired card. This super boy image from MFT was the perfect character to base my card on. I coloured him in with copic markers and then went to work on the rest of the card. I used distress inks and a combination of stamps and stencils to make the different background pieces. For the Orange piece I used some spiced marmalade and carved pumpkin Distress ink for the base colour, then I used a cutout of the Altenew Halftone cover plate as a stencil with rusty hinge. On the blue piece I used salty ocean and mermaid lagoon for the base and  stamped the dots onto with a stamp from the Papertrey Inks superhero stamp set using blueprint sketch. The yellow piece was inked with squeezed lemonade on the base and sponged with mustard seed over a Penny Black chevron stencil.  The red piece was also made with a stencil that I made with my Silhouette machine since I do not own a sun ray stencil. I used Candy apple and festive berries on the base and some fired brick as the darker colour with the stencil. Lastly, the base of the green piece was twisted citron and I stamped the halftone circles from Altenew with PTI's new leaf ink.
To get the comic book effect I used black card stock and the split die from MFT's Blueprints 18. I then cut those two panels in half to get 4 pieces. I used the black pieces as my matt and trimmed the inked pieces down to fit. The words were dies from PTI 's superhero set.  I cut two of each. 1 from black card stock and the other from a coloured card stock. I offset them to create a shadow effect.
I attached everything to a white card base and popped up the circle with foam tape to create some dimension.
Phew.... that took almost as long to explain as it did to make. 😂😂😂 (not really.)

Well, I hope you like todays card.
Thank You for stopping by.
Tasha 😊
Posted by natashakara at 1:29 PM 2 comments:

natashakara
I am a SAHM, who has loves to cook and create. I have always been very creative, and find the challenge of turning something ordinary, into something extraordinary a real thrill :) Please enjoy my little corner on the internet and I hope you come back often to see what I am up to :) Thanks for visiting :) Please feel free to e-mail me with any questions you might have at: natashakara@rogers.com

This is a Flickr badge showing public photos and videos from natashakara (Natasha). Make your own badge here.